Canada Thistle: How to Identify & Tips to Control 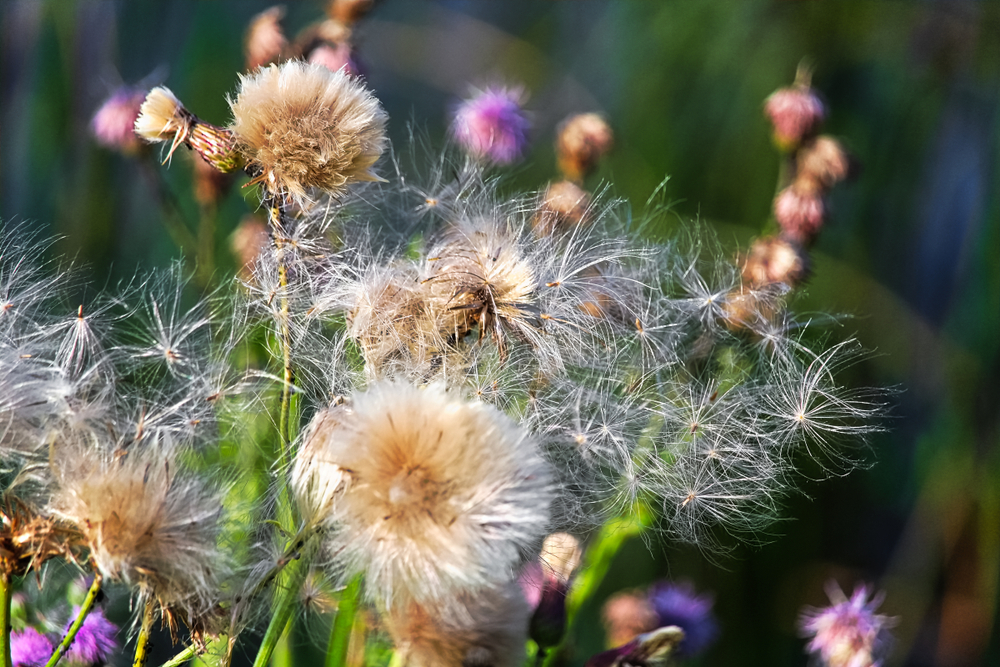 Perennial weeds grow from root stalks every year and spread by seeds and roots.

“Invasive species are plants, animals, or other organisms that are not native to the ecosystem under consideration and whose introduction causes or is likely to cause economic or environmental harm or harm to human health.”

Read on to learn:

HOW TO IDENTIFY CANADA THISTLE 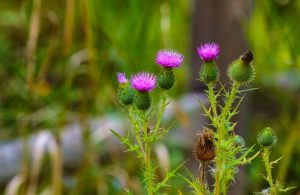 According to the Family Handyman, “Once firmly anchored in the ground, it can spread quickly via a robust root system. Vertical tap roots (taproots are the primary descending root along the vertical axis of the plant which is larger than the branching roots) can penetrate up to six feet into the soil searching for water and nutrients. Sideways-growing rhizomes, 12 to 18 inches underground, can grow up to 12 feet per year, allowing Canada thistle to aggressively spread and propagate. That makes killing it difficult.”

“And as if that wasn’t enough, each of those beautiful purple flowers will distribute up to 5,000 seeds, effortlessly spread over your landscape by the wind. Seeds can stay viable in the soil for up to 20 years before germinating when conditions are right.”

WHY CANADA THISTLE ARE DAMAGING 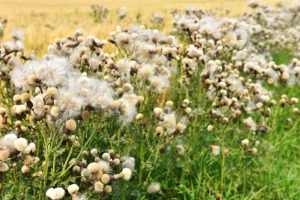 Canada thistle is classified as a noxious weed. “Noxious weeds have the ability to spread rapidly, cause severe crop losses and economic hardship.” (Source: Government of Alberta)

Are you wondering how they are able to cause such damage? This may help to explain:

Through these techniques, Canada thistle chokes out other plants growing and can take over, with patches of Canada thistle expanding and growing rapidly. 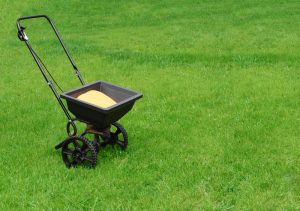 According to the Alberta Invasive Species Council, “The best preventive measure in non-cropland is to maintain healthy plant cover and to reseed disturbed areas with a desirable species as soon as possible. Canada thistle seedlings are very shade intolerant and will not establish under low light conditions. Avoid overgrazing to prevent thistle establishment in pastures/rangeland.”

To prevent Canada thistle from taking over your lawn, the most important thing you can do is to have a healthy lawn. Be sure to fertilize, aerate once a year, mow at a recommended height, keep it watered and if you have thin areas, overseed. Weeds are opportunistic, so if you have a healthy thick lawn, they are less likely to creep in and take over. 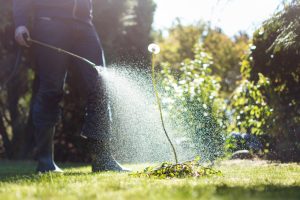 In order to prevent establishment and future spread, noxious weeds such as Canada thistle need to be controlled.

Landowners have a legal responsibility to control noxious weeds, according to the Alberta Weed Act.

In order to control Canada Thistle, it is important to kill the roots since the majority of their biomass is below the ground. “An integrated management plan that uses a variety control options is the most effective long term strategy for reducing infestations.” (Source: Alberta Invasive Species Council)

What NOT To Do

WHEN IS THE BEST TIME TO CONTROL CANADA THISTLE

According to PennState Vegetation Management, “The most important opportunity for control is the fall when thistle is recharging its root system for the next growing season. Fall is the ideal time to maximize injury to the thistle’s root system because systemic herbicides move through plants with the sugars being sent to the roots. As the thistle is stocking up its root reserves for the winter, it will send fall-applied herbicides to where they can do the most damage. Product selection is more important in the fall as only a few herbicides available for use in CREP plantings are truly effective Canada thistle control products.

“Late spring, when thistle is at the bud-to-early-bloom stage is the second important opportunity for control. Much of the energy to produce the spring flush of growth comes from stored reserves in the root system, causing a seasonal low of stored energy at bloom stage. This is an ideal time to eliminate the top growth and force the plant to use its scarce reserves to regrow.”

“An herbicide application at bloom stage will serve as a ‘chemical mowing’. The choice of herbicide treatment in the spring is not as critical as it will be in the fall. The spring application acts somewhat like a burndown treatment, eliminating the top-growth, but injury to the root system is limited. Well-established Canada thistle will eventually regrow after a spring application, regardless of the treatment.”

“What is important is that the treatment effectively eliminates the existing top growth.”

For more information on Canada thistle in Alberta, check out these resources:

If you would like help and advice on controlling weeds on your property, please contact us and we will discuss your needs and recommend a course of action.

Family Handyman, What Is Canada Thistle and How Do I Get Rid of It?

Mix It Up, Advice and Resources